Florida Statute 775.087 enhances penalties for criminal offenses when the use of a firearm is involved in the commission of the crime. 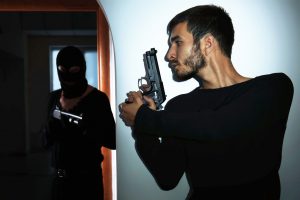 RECLASSIFICATION OF THE OFFENSE

The statute then has a secondary effect of creating what has become known as Florida’s 10-20-Life law.

The effect of this section of the statute is to create minimum mandatory penalties when a firearm is used in the commission of the offenses listed in the section.  These offenses are: Murder, Sexual Battery, Robbery, Burglary, Arson, Aggravated Battery, Kidnapping, Escape, Aircraft Piracy, Aggravated Child Abuse, Unlawful Throwing/Discharging of Destructive Device, Carjacking, Home Invasion Robbery, Aggravated Stalking, and Trafficking in Controlled Substances.

In the event that one merely possessed the firearm during the commission of the offense, the mandatory minimum penalty for the offense is ten (10) years incarceration in Florida State prison.

In the event that one discharged the firearm during the commission of the offense, the mandatory minimum penalty for the offense is twenty (20) years incarceration in Florida State prison.

In the event that one discharged the firearm during the commission of the offense and the result of the discharge was death or great bodily harm, the mandatory minimum penalty for the offense is twenty-five (25) years incarceration in Florida State prison.

If you find yourself charged with a firearm offense in Key West or the Florida Keys, contact the experienced criminal defense attorneys at Robertson and Hunter in Key West, Florida.

Depending on the specific offense one is charged with, there could be a variety of defenses to the charges.

In the event that one is charged with aggravated battery or murder, there very well may be a self defense argument to be made.  Florida has strong self defense protections both in its criminal jury instructions and in the statutorily codified right to an immunity hearing, commonly referred to as a “Stand Your Ground” hearing.

There are several defenses one might be able to assert in the event that the allegation involves some form of theft.  For example, one may have claim that he or she was the bona fide owner of the property and entitled to immediate possession of said property.  Additionally, one may have the argument that he or she was merely present and unaware of a firearm that was spontaneously pulled out by a co-defendant.

HOME PROTECTION AND/OR DEFENSE OF PROPERTY

One may also have a defense to the application of the firearm enhancement in the event that he or she is protecting their home or property.  This defense is even stronger in the event that one is in one’s own home, the protection of which is also codified by statute.

Keep in mind that every case is unique and this is certainly not an exhaustive list of defenses that might be available. If you are charged with a firearm offense in Key West or the Florida Keys, please make an appointment for a free consultation with the experienced and aggressive Florida Keys and Key West criminal defense lawyers at Robertson & Hunter, LLP. (305) 735-4587.